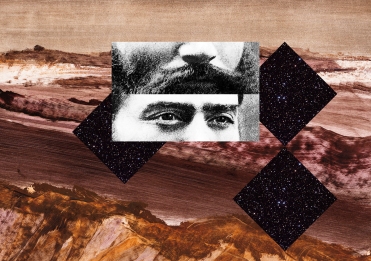 It’s a quarter to three in the morning and my flatmate and I are at our front door because I’m trying to unlock it. The task is taking longer than usual in my drunken state but eventually we get inside the flat; he’s yawning and I’m singing one of the songs from the club we’ve just left. He tells me that he’s going to bed and I immediately stop singing Ariana Grande in shock. I proceed to explain to him that I had really hoped that we could stay up together to look at the stars and talk about deep things like the universe and our place in it until the sun came up. He yawns again and points to his mouth to emphasise his tiredness and repeats how tired he is. This leads to a close to four minute verbal argument that ends with him frustratedly throwing his hands up in the air and saying that all the shouting has woken him up so we might as well go look at the stars and talk about deep things like the universe and our place in it anyway. I am happy I have gotten my way but feel guilty as well, because I can tell that he’s going into this begrudgingly. I forget my guilt as soon as we open our back flyscreen door and sit on the wicker chair out on the balcony, due to the fact that I am still quite drunk and I can smell salt from the beach in the breeze and these are the sort of things that make you forget disgruntled flatmates. Almost immediately though, I am asleep on the wicker chair and soon after that I am dreaming.

My head is resting on a piece of flattened rock and it’s not the most comfortable I’ve ever been, but right now I actually can’t believe how incredible and expansive the stars and the sky look. Looking up, I can see the Southern Cross and Orion’s Belt and constellations I’ve never seen before but look as if they should have names like ‘Troughton’s Pail’ and ‘The Pudgy Keyhole.’ I’m so overwhelmed by the amount of stars there are and think about how different it is being here in the country as opposed to the city where I live and where the pollution from all the smoke factories hide this endlessness and possibility. This is when I turn my head and thank Ned Kelly for inviting me on this camping trip, and he turns his head too and I can see him smile even though he’s wearing his helmet. He turns back to the sky and points at a star, asking me its name. I explain to him that the star he is pointing at is called Alnilam and that it is a part of Orion’s Belt, itself a part of the constellation of Orion. He doesn’t make a noise but I sense that he is interested so I continue. I talk about how because of how long the light from far away takes to travel to our eyes, many of the stars we are looking at are actually from long long ago, and that some of them have probably exploded thousands of years in the past. He tells me to shove this up my arse and I try to explain to him that the speed of light is two hundred and ninety nine million seven hundred and ninety two thousand four hundred and fifty eight metres per second and that this is the maximum speed that light and matter and kettles and everything in the universe can travel, but I can tell that his interest is waning so I just stop talking  and I can feel the fire we have built licking my toes.

Ned Kelly is closer to me now and he tells me that he has heard a theory that there are an infinite number of universes all with an infinite number of possibilities. I laugh at this and say that I can’t believe he has heard of the Multiverse theory but not the concept of the speed of light. He ignores me and says that hypothetically there is a universe just like the one we are lying in right now, where an identical him and an identical me are looking at the stars having this very conversation only we both have large antlers attached to our foreheads. I tell him that by the same token there is also a universe where neither of us have been born and there is nobody lying where we are lying now. In response to this he tells me that there is also a universe where I am less of a depressing dickhead. I laugh and then stop and we sit in silence. I start thinking about how there is a universe where Batman is real and that Gotham City is a real place but stop when I notice Ned Kelly taking his helmet off. I turn my head to look at his face properly realising I have never seen him helmetless, and I am struck first by his impressively bushy beard and second by how young he looks. Having always imagined Ned Kelly to be several years my senior I’m surprised by how familiarly twenty he appears and he’s looking at me too. His face is straight in front of mine now and I can smell firewood on the breeze and watch as the hairs on his face shimmy like blades of grass. He asks me if I’ve ever loved anyone, which I answer no to, but feel like I’m lying without knowing it. He then proceeds to confess in great detail the history and scope of his love for me, telling me that all the banks he has robbed and all the policeman he has killed have been to impress me, even though he knows that I won’t be born for another 115 years and that he hopes his crimes are significant enough to be culturally or aesthetically relevant by the time I am old enough to appreciate them. My heart is beating like crazy and I tell him that I’m straight and he tells me that sometimes people just love people and I’m back in Miss Phillips class in Grade 5 learning about bushrangers and I’m yearning for a bearded steel covered murderer that was dead before my grandparents were conceived. Ned Kelly and I are making out and I’m pulling his beard away from his face and it grows longer and longer the more I pull it until it comes down to his crotch and I stop pulling it and apologise. He pulls away from our embrace looking satisfied, but his expression fades away with our fire and the wind.

He stares upward and I can only see his profile in the moonlight but it looks almost like the face of a child now. A child that has grown a beard and who wears frightening armour to make themselves look tougher, like a butterfly with wings that look like eyes. He asks me if I have ever killed anyone, and I tell him that I haven’t and he doesn’t say anything but I can tell that he’s sad and scared and far too alone and the sky is lit up by a shooting star and underneath it I can see a tear fall into his beard. I want to tell him that he’s not alone and that everything is going to be alright and that I love him too, and that his place in the universe is nowhere near as small as he thinks it is, but the sky is expanding and stretching out in front of us until it is also the earth beneath us and I’m falling through the darkness and then I catch myself and I’m sitting in a wicker chair on the balcony in the morning.

My flatmate has made me a cup of tea, and I think about how there is a universe where our dreams are not just dreams.

Dylan Murphy is a writer and a filmmaker and a guy you’ve heard of now. You can see more of his work on YouTube.